Under the guidance of Governor of the Northern Province GA Chandrasiri, second Medical Camp for Non-Communicable Diseases was conducted for the members of Governor’s Seniors’ Citizen Club on 01 November 2014 at Mallakam Sribaskaran Hall.

At this camp, 06 medical officers including ENT specialist conducted the camp. More than 250 members participated and benefitted.

It was recommended by medical officers to issue spectacles for 65 senior citizens and hearing aids for 03 members.

It should be noted that wheel-chairs, white canes and spectacles are to be issued by Governor on 08thNovember 2014. Further, as per the request of the MOH of Tellipalai Dr.Nanthakumar, such type of medical camp will be conducted at resettled area of Keerimalai.

“Governors Trust Fund was established for the purpose of assisting people of various categories who face difficulties in pursuing their medical treatment, higher studies or daily living. Strict procedures are followed to select the correct recipient.”

An event of issuing cheques to 20 people for their medical purposes through Governor’s Trust Fund was held at Maviddapuram Kanthaswamy Temple. Governor of the Northern Province GA Chandrasiri participated as the Chief Guest and issued the cheques to the beneficiaries.

0.69 Million spent for this purpose.20 recipients received this financial assistance through Governors Trust Fund (GTF) for their medical treatment.

Chief Priest of the temple, Secretary to the Governor L.Ilaangovan, Asst. Secretary JX Selvanayagam and temple administration people were also present at this event.

“This medical camp has been a very useful practice and it served the people of Kilinochchi. The Killinochchi people thanked the relevant officials for initiating this noble task for the betterment of human kind.”

A special medical camp was held at Kilinochchi Santhapuram Kalaimagal Vidyalayam on 05th April 2014. This was organized under the guidance of Parliamentarian Namal Rajapaksa by Health Ministry for health enhancement of the people who resettled at Santhapuram and Ambalnagar in accordance to a concept of the Mahinda Chinthaya.

602 people benefitted at this medical. RDHS, Kilinochchi Dr.Karithikeyan also participated in this event.

The clinics were conducted by two cardiologists from the Navaloka Hospital Colombo, Dr. Richard Saldana and Krishan de Silva assisted by medical officers and nurses and Army doctors. Over 300 civilians attended the medical camps and medical advice was given to those in need and some of them were referred to the nearest hospital.

Earlier three patients with acute heart diseases were cured after three successful surgeries done in Colombo on Kajenthini (21), Santhus (3) and Apisha (3) with intervention of the 511 Brigade when it was based at Atchelu. 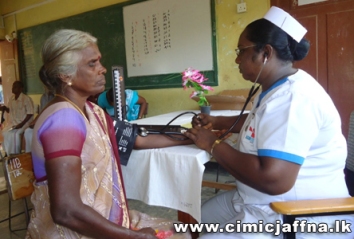 Another medical camp to identify heart patients in Jaffna and to refer them for further treatment was organized by the 511 Brigade at Atchuvely Central College on 31st March. A medical team from Asiri Heart Care Centre, Colombo arrived from Colombo at invitation of the Commander 511 Brigade Colonel Wijendra Gunathilake to conduct the clinic.

Commander Security Forces – Jaffna Major General Mahinda Hathurusinghe attended the inauguration of clinic as the Chief Guest. This medical camp was sponsored by the Atchuvely Lions’ Club for the second time.

Nearly 300 civilians from the 511 Brigade area attended the clinic, and 9 out of the total examined were advised to seek immediate admission to hospital for surgeries. Many others were educated on preventive measures after examining their ECG reports. Facilities for blood and ECG tests had been made available free at the venue.

During such clinic conducted by the 511 Brigade with collaboration of the same medical team last year, 21 year old Kajenthini, 3 year old Apisha and 3 year old Santhus were found to be suffering from acute heart diseases. Hasty arrangements were made by the Security Forces Headquarters – Jaffna to fly them to Asiri Heart Care centre where the surgeries were administered on priority basis.

END_OF_DOCUMENT_TOKEN_TO_BE_REPLACED

More than 200 officers and other ranks as well as members of the civil staff serving the 55 Division Headquarters atVettalaikerny, Jaffna, in response to a request gave away their blood for the use of Tamil civilians under treatment at Jaffna Teaching Hospital during a mobile project on account of Poson Full Moon Day (23).

The Army was compelled to organize this campaign after medical officers at Jaffna Teaching Hospital turned to the Army for blood since an acute shortage exists in the Jaffna Blood Bank. The matter was brought to the notice of the 55 Division Headquarters by medical authorities.