Making a history in the field of football in Jaffna, a team of experienced coaches and players from the USA arrived in Jaffna to conduct coaching camps for youths and schoolchildren this week.

About 375 youths from different leagues in Jaffna, Valikamam and Islands administrative divisions and schoolchildren took part in the programme. One motive of organizing this sports camp is to inculcate qualities such as patience, equality, courage and acceptance of victory and defeat alike. It helps eradicate war mentality and assist the process of reconciliation.

A similar programme which gives training to players in Thenmaratchci and Vadamaratchi administrative divisions will be held at St. Michael’s grounds in Nelliady from 25th to 27th instant. 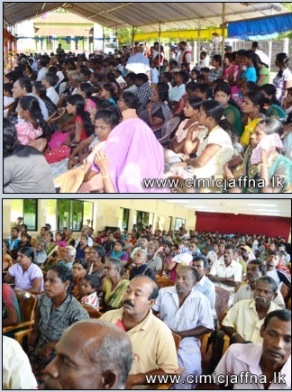 Some more houses and lands in Vadamaratchi East, Pachchilapallai and Valikamam areas, hitherto occupied by the Army, were released on Friday (23) after shifting those camps to government lands.

Commander Security Forces – Jaffna (SF-J) Major General Mahinda Hathurusinghe delivered the documents related to the release of 51 acres and 7 houses in Uduththurai, Mamunai, Champiyanpattu and Pullopallai to the Minister of Traditional Industries and Small Enterprises Development Mr. Douglas Devananda who subsequently handed them over to Civil Administrative Authorities. Camps were established in those areas by the Army in 2009 after defeating the LTTE terrorists in Humanitarian Operation.